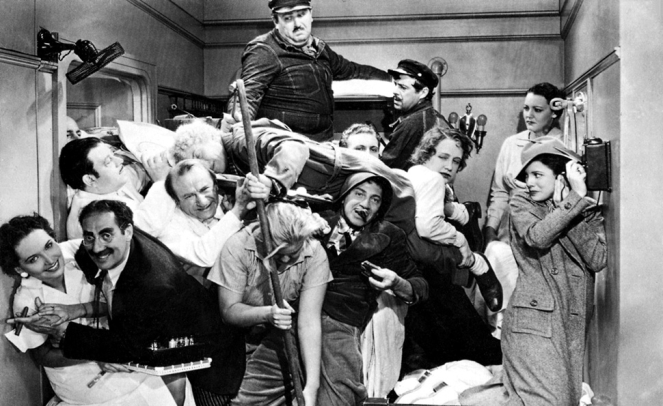 Every year, when December 31st rolls around, I am reminded of a New year’s Eve about 50 years ago in Chicago.

Back before climate change was a thing, winters were REALLY cold. This particular New Year’s the temperature must have been well below zero.

There were about six of us teenage boys, bonded by the fact that none of us had a car or  money. Together we set out, on foot, looking for a party to crash.
This was not a great plan. It was so cold, and we were so poorly prepared for sub zero conditions, that we could only walk about 100 yards or so before we had to duck into an apartment building lobby to warm up. You could still access lobbies in those days.
We had just squeezed into the lobby of a building on Touhy near the lake when the door opened from the inside and four guys our age forced their way into the tiny space.
One of them was acquainted with a member of our group. I knew this because, when he saw my friend Phil Tucker, he yelled “Tucker! ” and started throwing punches.
What ensued was the the stateroom scene from the Marx Brothers’ Night at The Opera if it had been directed by the Three Stooges. There was no room to fight, and no one wanted to fight outside, so there was a lot of yelling and pushing and threat-making. Few of the punches that were thrown landed. No damage was done.

When things settled down, the two groups went their separate ways. I don’t remember if we ever found a party, but our main goal was to not be bored on New year’s Eve. Now, we had something to talk and laugh about for the rest of the night.

That New Year’s was a success!

On a chilly Sunday morning in the fall of 1969, while hanging out at McDonalds after Mass, a long, gold-painted limousine, license plate “WC3”, pulled into the parking lot. Out of the backseat, which was full of well-dressed people, stepped a small man with a pencil-thin mustache, wearing a suit and smoking a very smelly cigar.

Because I had read that morning’s Chicago Tribune profile on a local billionaire insurance tycoon, I recognized W. Clement Stone III.

I took a moment to bask in the fact I was just a few feet away from Chicago’s richest man, then began trying to figure out what the hell W. Clement Stone was doing in the Clark St. McDonalds in Rogers Park.

Stone was not only famous for being a fabulously wealthy (self made) man who lived by a philosophy based on “positive thinking,”  he was also well known at the time (and remembered today) as Richard Nixon’s biggest financial backer. His donations impacted campaign finance laws.

Mr. Stone’s contributions of more than $2 million to President Nixon’s re-election campaign in 1972 — on top of even greater donations to Mr. Nixon in 1968 — were cited in Congressional debates after Watergate as a reason for instituting campaign spending limits.

I surmised that Stone and his entourage were en route to the Bears game at Wrigley Field. Traveling into the city from his Winnetka mansion, Stone had stopped at McDonalds to pick up provisions for the trip.

Based on what happened next, I realized this it was likely Stone’s first McDonalds visit.  When Stone placed his order, the teenager waiting on him looked puzzled, then bent closer to the billionaire. He asked Stone to repeat his request.

A moment later, it was Stone’s turn to be puzzled. He clearly did not expect to receive six hot chocolates.

Did I mention this was probably his first “Mickey D” experience?

There followed a quick explanation, that “McDonald’s doesn’t do that. ” Stone’s hot drinks were replaced with semi-warm hamburgers. He picked up his bag and headed for the door.

As he was about to depart for the game, a friend with me yelled, “Hey Clem!”
Standing the doorway, Stone turned, smiled and gave us a little wave worthy of a king. At that moment, that’s exactly what he was.
# # #

On the occasion of his 85th birthday, the Chicago Tribune published this wonderful profile, which gives you an idea of what it must have been like to be in Stone’s company.

Almost half a century ago, the teenagers from St. Jerome’s were playing football at Sherwin Park on North Clark Street when a strange man came over and interrupted our game. He said he was about to open a sandwich shop nearby and we ought to check it out.

We did. This was the first of many encounters with Lou Ragusi who, to me, was always Capt’n Nemo.

I remember my initial reactions:

“This food is good.”

He talked constantly and at high volume. He seemed to be arguing with his workers and they were arguing back. They all seemed to be having a good time. There was nothing like Nemo’s in the neighborhood at the time so I was sure he’d quickly fail.

Bon Voyage, Capt’n. I hope wherever you are, you are getting a free taste of soup and I hope it’s as good as Mrs. Nemo’s Split pea.

I’ve had two really terrible birthdays in my life. The last of these was 36 years ago.

I was depressed because I had convinced myself everyone else had their life figured out by age 30.

Because I was only two years out of college (it’s a long story), had no money and wasn’t married, I felt like I was failing at life. Despite a nice party, I went into a major sulk and started my 30th year with one of the all-time great hangovers.

In time I saw I was doing fine. Eventually I realized life was pretty good. And it only continued to improve.

That was the last time my birthday made me depressed.

But, that was not the saddest birthday of my life. That was the day I turned ten.

I had been excited about this birthday. It had a number with two digits! Big stuff.

There would be presents!

Lots of attention FOR ME!

It didn’t exactly work out that way. Three days before my birthday, in Dallas Texas, the President of the United States was murdered.

Suddenly, everyone I knew was sad. I was puzzled at first. After all, my parents were Nixon Republicans and I’d never heard a good word about President Kennedy spoken by either of them. So, I was surprised by my mother’s crying.

The assassination occurred on a Friday. Instead of preparations for my party, the weekend was spent in front of the television, where there was only one thing on; coverage of and reaction to, the assassination.

To a ten year old, there was a sameness to all I saw on the small black and white screen in our living room. I couldn’t understand why the news people kept repeating  information and showing the same pictures.

Things took a turn for the unexpected on Sunday, when alleged gunman Lee Harvey Oswald was, for reasons never adequately explained, marched through a crowded hallway at the police station, where he was shot by (choose one):

A) a distraught local resident,
B) a patriotic American,
C) a strip club owner who wanted to ensure Oswald didn’t implicate the Mafia.

There were presents and cake on my birthday (they’d already been purchased) but no joy. Rather than the attention I had anticipated, the focus was on President Kennedy’s funeral. The ceremony was overwhelmingly sad and, at times, sent chills down my spine, like when the riderless horse, with backward boots in the stirrups, was led down Pennsylvania Avenue as part of the funeral procession.

That weekend, I experienced crushing sadness for the first time. There would be more to come, of course. It was the first of those things that happen that make you think, “I will never get over this.”

And you don’t. Tragedy is indelible.

Yet, life goes on.

Is that any way for a child to talk to her father?

This will be a pretty good birthday. So will each of those to come. 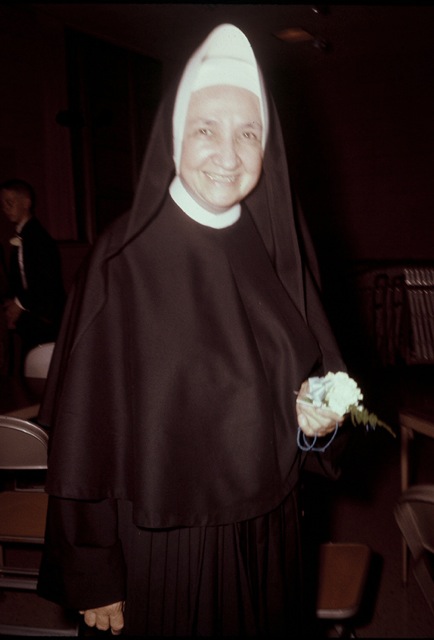 (A previous published version of this post contained an error. As I was fixing that, I recalled information from more than a half-century ago that changed some of the details. This is an updated version of the original post)

With baseball season coming up, my thoughts drift back more than 50 years to the one time in my life I regret going to Wrigley Field.

At the center of the story is Sister Mary St. Delphine.

In the competition for the worst/craziest/most violent nun, I always win because my eighth grade nun was Sister Delphine.

In the photo above, taken around the time she was my teacher, Sister Delphine was approximately 180 years old. She presided over Room 301 at St. Jerome’s School in Chicago’s Rogers Park.

Every day of eighth grade started with torture disguised as “music appreciation.”

There was an upright piano in the front of the room with a mirror positioned strategically above the sheet music. This allowed Delphine to monitor the students as she pounded out the hits using her gnarled, arthritic hands.

The songs we had to learn in 1966 included World War II era classics Buckle Down Winsocki and Coming in on a Wing and Prayer, along with one contemporary hit, The Ballad of the Green Berets.

This was torture, not because the songs were bad (though most of them were extremely old-fashioned and corny), but because Sister Delphine insisted on singing them.

I strain to find comparisons, but if you Google ” Taser demonstration video” you’ll have a sense of the experience.

Sister Delphine demanded a roomful of eighth grade boys remain calm and unsmiling as the most horrible sounds we had ever heard filled the room. This was impossible.

When we laughed (and we all laughed), Sister, who had been watching us via the mirror, would get up from her bench, grab a yardstick (she bought them by the gross) and offer her response to our review of her warbling.

We had mixed feelings when the yardstick was headed our way.

On the one hand, we knew it was going to hurt. On the other, there was usually no singing during beatings.

You could tell who Sister Delphine liked. They were the ones with the faint bruises.

Then there were others. I was one of those.

There probably was never a good time to have met Sister Delphine, but this was definitely a bad time.

I arrived in her class frustrated, hurt by my parents recent divorce, and overly emotional. Delphine picked up on that and, like any nurturing teacher would, gave me a nickname in front of the class.

Surprisingly, this did not result in improved behavior.

As the end of the eighth grad year neared I hated school. On the school day in question, in May 1967, I realized I really needed to see a Cubs game.

I don’t remember what my plan was for explaining my absence. Maybe the story was that I was sick and had to go to the doctor. Or, I had to stay home in bed. Or I had a sick relative I had to care for.

Whatever the story was, it did not involve sunshine.

So maybe sitting in the bleachers was not the best idea.

When I saw my sunburned face I knew I was in for a bad time. The next day, I made a half-hearted attempt at a lie, but Delphine wasn’t having it. She quickly got me to confess.

The rest is a blur, but I’m pretty sure I got more hits than the Cubs did the previous afternoon.

The kicker: While I was sunning myself at the ballpark, Sister Delphine, who wasn’t much interested in teaching anyway, decided to give herself and the class a treat and tuned the classroom TV to the ballgame.

I’ve only scratched the surface (something Sister Delphine did often) on my eighth grade year.

There will be more.