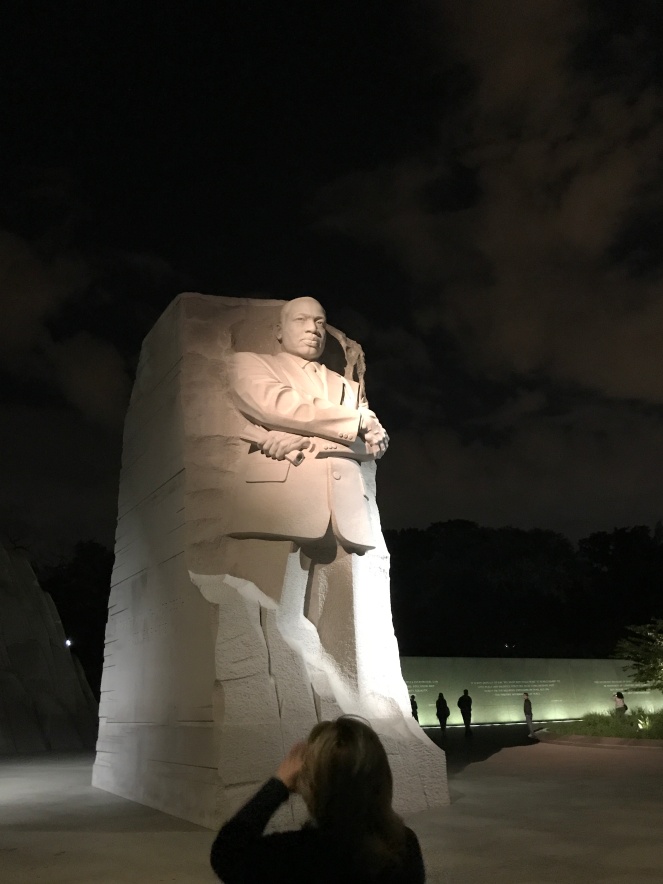 The advantage of being (mostly) retired is having time to do things I didn’t used to have time to do.

I did a lot of traveling for business, but little sightseeing, over 21 years in my last job. My family, who sometimes joined me on business trips, got to see the USA while I, for the most part, headed off to trainings, conventions or special events,

We’re now trying to fix that, beginning with a trip this month to Washington D.C.

Nothing on the trip topped the “Monuments By Moonlight” bus tour, which took us to National Memorial sites in the nation’s capital.

The couple of hours spent on this tour simplified, for me, the issue over whether statues honoring the Confederacy should to be displayed in public spaces in the United States.

The D.C. monuments almost take your breath away. They remind us these great American leaders, who themselves were far from perfect, had astronomical aspirations for the United States and worked, and fought and in some cases, died, trying to achieve them.

Monuments to the Confederacy remind us of the aspirations of those willing to tear their country apart and kill their fellow Americans over the right to use slave labor to maintain their way of life. Most were installed during the 20th century; there was a surge of statues in the early 1900s coinciding with the rise of Jim Crow laws and another mid-century surge as the Civil Rights movement began to gain ground.

James Grossman, the executive director of the American Historical Association, says that the increase in statues and monuments was clearly meant to send a message.

“These statues were meant to create legitimate garb for white supremacy,” Grossman said. “Why would you put a statue of Robert E. Lee or Stonewall Jackson in 1948 in Baltimore?”

It seems ridiculous that it needs to be pointed out that in “the land of the free and the home of the brave” there is no appropriate public place for a celebration of the Confederacy and those who aspired to maintain slavery.

During our visit, we also saw the portion of the Berlin Wall displayed in the Newseum.

Imagine this wall being displayed in a place of honor in Berlin with the intention of reminding residents of those halcyon days when part of the city and much of Germany was held captive by the Soviet Union.

That makes as much sense as putting Confederate statues on the public square in the United States of America in 2017.

If you have the chance, see the monuments in Washington D.C.

They’re impressive by day. They are awe-inspiring at night.

A part of the Berlin Wall stands in a Las Vegas casino, though not in a  place of honor.

Retired after 21 years with Illinois' largest education employees' union. This blog is about things that interest me including: Politics and current affairs, humor, movies and music, The Cubs and stories from my (somewhat checkered) past. View all posts by @CharlesMcBarron